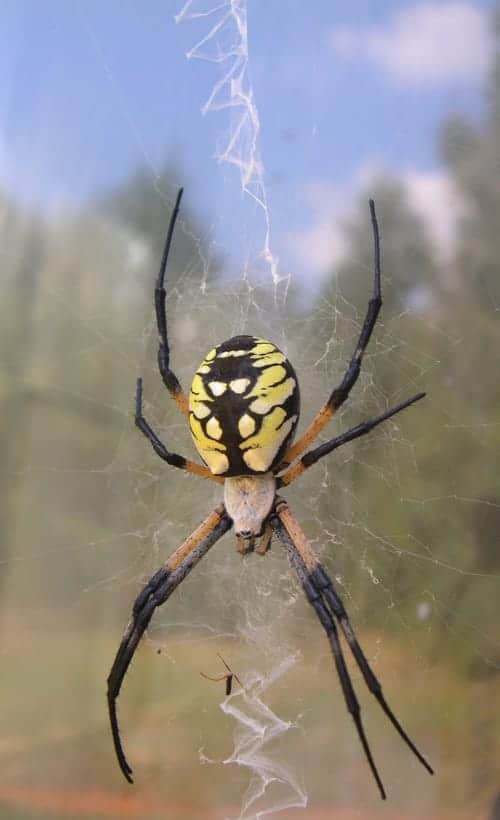 The picture is of a Yellow Garden Spider which are often seen in the landscape in late summer and fall. Read on to learn more about this and another fall spider.

Between now and Halloween we will be seeing more spiders around our yards.  The first hard frost will kill them off. Now they are mating and producing egg sacs so their eggs can overwinter and re-establish the population next spring.  There are two orb-weaver spiders with large webs that are most commonly seen.

Barn spiders (Araneus cavaticus) can be found on porches, where flying insects attracted to porch lights get trapped in their webs.  These spiders are nocturnal, constructing a new web every evening and taking it down before dawn.  This rusty brown spider has legs extending about 2 inches, making it look large and noticeable.  These spiders hide during the day, but at night are found in the middle of the web, waiting for insects to be trapped.

The yellow garden spider (Argiope aurantia) is one of the longest spiders we have here in Georgia.  It is frequently found in gardens and around shrubbery where it constructs large webs to entrap flying insects.  The abdomen has distinctive yellow and black markings while the front part of the body, the cephalothorax, is covered in white.

The female yellow garden spider typically remains in one spot throughout her life, repairing and reconstructing her web as it is damaged and ages.  Her web may have a distinctive zigzag of silk through the middle, explaining its other common name, “writing spider.”  Unlike the nocturnal barn spider, the yellow garden spider can be found in its web anytime.  Sometimes a smaller spider will be found in the web with her; this is the male garden spider.

These spiders have been present all summer, eating pest insects and growing.  By late summer they are large enough that people start noticing them.  Remember,Georgia has over 800 species of spiders, all of which are harmless if you leave them alone.  All spiders are more afraid of you than you are of them.

Stinging and Biting Pests of People