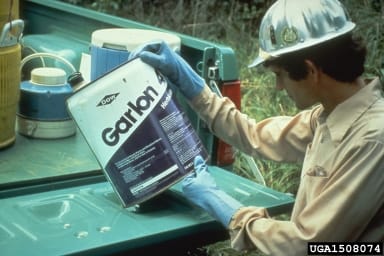 Solution. A liquid and all the chemicals that are dissolved in the liquid. For example, sugar or salt dissolve completely when placed in water to make a “sugar solution” or “salt solution”. In this example, water is called the solvent and the sugar/salt called the solute. When a chemical is soluble in a liquid, it forms a solution and cannot separate.Suspension. A liquid that contains solid particles that are not dissolved.  Over time, the solid particles will settle to the bottom of the container. Many liquid spray formulations (wettable powders, suspendable concentrates, and microencapsulates) are suspensions in water, and will settle to the bottom of the sprayer if not agitated. Suspensions should be shaken, or agitated, often to resuspend the product in the water.

Contact toxicants are chemicals that penetrate the target organism on contact. For example, liquid sprays are usually effective only after an insect crawls on the treated surface and contacts the residual deposit.

Oral toxicants are chemicals that act after having been ingested by the target organism. For example, bait products kill only after an insect consumes the bait containing the active ingredient.

Fumigants are chemical gasses. They act after an insect breathes them.