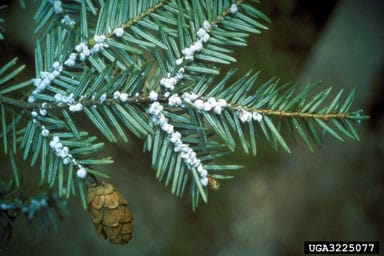 Merritt Melancon, news editor with the University of Georgia College of Agricultural and Environmental Sciences

Hulking above their neighbors in the Chattahoochee National Forest, Georgia’s century-old hemlocks are giants. But the relatively scarce trees are quickly being felled by the tiniest of insects — the invasive hemlock woolly adelgid.

The adelgid is a tiny, fluffy aphid relative that feeds by piercing the bark of hemlock trees and draining the contents of plant cells, which contain nutrients created by the tree during photosynthesis. Millions can live on one tree, and by the time they finish feeding, the tree no longer has the strength to transport water and nutrients from its roots to its branches. The pest first arrived in Georgia 10 years ago after moving south through the forests that surround the Appalachian Mountains.

To date, the adelgid has killed millions of hemlocks on the mountainsides and stream valleys of the Appalachians, from New England south to the Smokies and the north Georgia mountains. Once infested, a centuries-old tree can die within 3 or 4 years said Will Hudson, a forest entomologist with UGA Extension.

University of Georgia researchers are racing against time looking for long-term biocontrols for the nutrient-gobbling pest.They hope by preserving specimen stands of hemlocks with insecticides now, there will be enough trees left to aid in regenerating Georgia’s hemlocks once the bio-control agents are ready.

“We can’t just let a bug loose in the forest and hope it works. The requirements for testing and screening of a new biocontrol agent are — and rightfully so — really, really stringent, and it takes time. The hemlocks don’t have that time,” said Hudson.

Enter the Legacy Tree Project — a public-private partnership between UGA researchers, Valent USA, private tree care companies and several municipalities. The project’s goal is to preserve stands of hemlocks so they can regenerate once the woolly adelgid is under control.

While hemlocks make up a small percentage of the forest canopy in Georgia, they are vitally important to the forest ecosystem — especially around streams. The giant trees shade streams and stream banks and provide the cool waters that Georgia’s trout populations need to survive while sustaining the tourist economy that surrounds the trout.

In addition to the aesthetic impact of the loss of the largest trees in mountain forests, dead trees pose a threat of falling, making camping, hiking and even driving, risky.

The woolly adelgids can be controlled two ways. One way is through the development or discovery of biocontrol agents — predatory insects that eat adelgids, but leave the rest of the ecosystem intact. This is a painstaking process of trial and error, but will offer low-cost, long-term control.

The other method is to treat every hemlock in the forest to prevent or cure adelgid infestation. This would be prohibitively expensive, time-consuming, logistically implausible and possibly ecologically damaging.

Entomologists at UGA and the U.S. Forest Service, including recently retired UGA forest entomologist Mark Dalusky, have identified and released two predatory beetles. They hope these insects will be effectively control the adelgid without harming the forest, but neither beetle has reached the numbers needed to control the pest.

Saving trees now, so that they can be preserved later

Chamberlin’s company, Valent, helped launch the Legacy Tree Project in 2010 in a handful of Midwestern towns with the goal of saving ash trees from emerald ash borers. Thousands of trees were saved, and a framework for battling other invasive tree pests was developed.

Valent donates insecticide where landmark hemlocks are dying – like the Chattahoochee National Forest.

The insecticide, a dry powder mixed with water, is injected into the ground around the hemlock’s root ball and the tree slowly absorbs the material, which kills the adelgids and prevents new infestations.

“Nearly 100 percent of the chemical is absorbed by the tree, which means there is very little chance any will move into nearby streams or groundwater,” George said. “There is hope for biological controls coming down the line. But the only way to get your hemlock tree back to health, at this point, is to use chemicals.”

This is the first time that the Legacy Tree Project has worked on public land. George has worked with Young Harris, Clarkesville, Dillard and Sky Valley and saved between 10 and 15,000 hemlocks on private land.

“The problem of global trade and invasive species are here to stay,” Chamberlain said. “We only have so many well adapted native species of trees that we can rely on, and we need to maintain them. What we’re trying to do is build awareness about invasives and stimulate action to help protect native tree populations.”

For more information about the hemlock infestation in north Georgia and UGA’s research into stopping the pest, visit www.forestpests.org/.