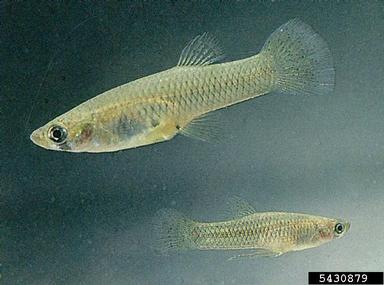 Edited from the PROGRAM SPOTLIGHT section of the November 2013 issue of Dideebycha, the Georgia Mosquito Control Association newsletter.

The mosquitofish program is a new venture for Richmond County Mosquito Control. Since there are always some pools that have to be in control maintenance due to an inability to determine who owns the pool, or other reasons, a means of reducing the cost of maintaining these pools was sought. Tiny fish could be the answer to some of the county’s biggest mosquito problems.

Mosquitofish fill Phinizy Swamp and now they also fill some abandoned swimming pools. It’s a new project with Richmond County Mosquito Control and the Southeastern Natural Sciences Academy and it could save residents a few bug bites.

Dr. Oscar Flite is the Vice President for Research at the Southeastern Natural Sciences Academy at Phinizy Swamp. They’ve teamed up with Richmond County mosquito control for an experiment with mosquito fish placing them in abandoned pools to stop mosquito’s from breeding there.

Earlier in the summer they added about 30 mosquito fish to 4 pools in the county. In two weeks they went back to check and see how the programs working. The fish had survived and were reproducing, and preliminary surveillance data show a decrease in numbers of mosquitoes being caught in traps set in the vicinity of the pools.

The mosquito fish will save both time and money. “It’s going to save us a lot of money because treating a pool three times a year costs us about 150 bucks,” explained Koehle.

“The guys spent about 5 minutes going out and catching more than a 150 mosquito fish, so in terms of economics I think it works out pretty well,” added Dr. Flite. An easy fix and easy to get rid of when someone wants to swim.

“When a new homeowner moves in, they dump the water out the fish go with it no big deal,” said Koehle

“Nobody loses, everybody wins in this.”

Well, everyone except the mosquitoes.