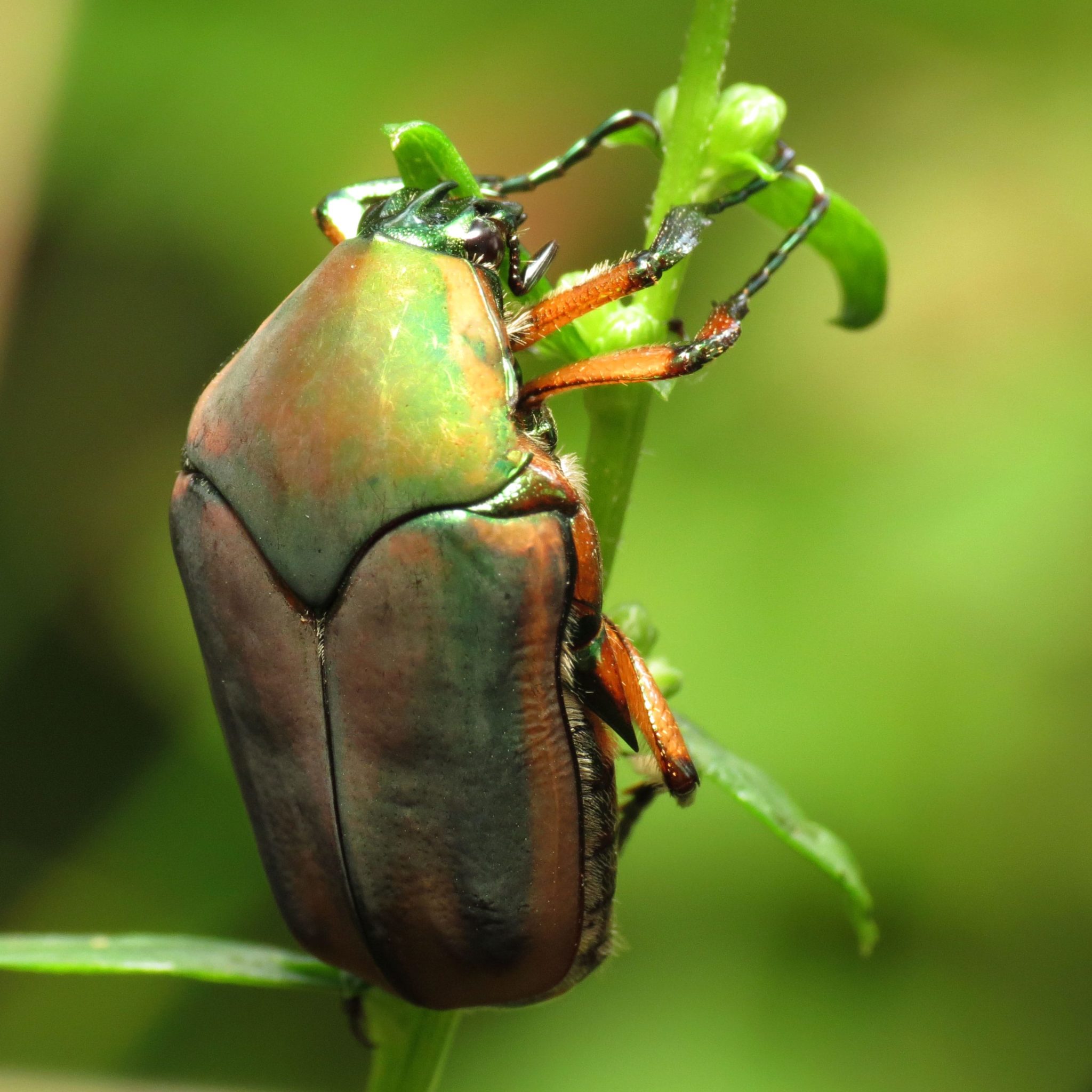 Damage caused by green June beetle grubs, Cotinis nitida L., has been increasing in Georgia landscapes, home lawns and other established grassy areas. Although green June beetle grubs prefer to feed on decaying organic matter, they can chew the tender roots of grass plants. Damage to turf and pasture is primarily mechanical because grub tunneling and movement in the soil uproot grass plants, which then dry out and die.

Green June beetle grubs are different from most grub species in the southeastern United States in that they come out of the ground at night and move from one place to another. Green June beetle grubs crawl on their backs with their legs in the air. This movement easily distinguishes them from most other grubs in the soil. When disturbed the grubs curl up into a C-shape, typical of the grubs in their family, the Scarab beetles. Grubs of some related beetles, called Euphoria, or bumble flower beetles, also crawl on their backs. They might occasionally be confused with green June beetle grubs; however, bumble flower beetles are not known to cause extensive damage to turfgrass or pastures.

Green June beetles have one generation each year. The grubs overwinter in the soil. They may become active during warm winter days. Fresh mounds of trails of pulverized soil indicate fresh grub activity. Grub activity increases as the spring weather becomes consistently warmer.

Grubs pupate in cells in the soil during late April and May and remain in the pupal stage for 2 or 3 weeks. Newly emerged adults remain in the soil for an additional week or two. In most years, green June beetles leave the soil beginning in late May and continue through early August. Peak flights usually occur from June through July.

Female beetles fly over the grass surface early in the morning and settle into the grass just after daybreak. Male beetles fly during mid to late morning. Female beetles produce substances that attract the males to them. After mating, the female green June beetle flies close to the turf or grass surface, selects a site (preferably moist, organic soil), and digs several inches into the soil. The female beetle constructs a walnut-sized ball of soil in which she lays 10 to 30 eggs. Eggs are nearly round, about 1/16 inch in diameter. Each female may lay as many as 75 eggs during a 2-week period. Eggs hatch in about 2 weeks. Newly hatched grubs are about 3/8 inch long. Young grubs begin to tunnel through the soil in search of food (organic matter). They typically come to the surface to feed.

In turf, the grubs usually leave small mounds of soil around the mouth of each tunnel. By August, grubs are large enough for mounds to be seen on short mowed turf and by mid-September on taller grass. In pastures, grubs leave trails of pulverized soil as they tunnel near the surface.

A small amount of green June beetle tunneling can help aerate the soil and be beneficial; however, extensive tunneling can be harmful. Tunneling loosens the soil and creates a spongy layer about 2 inches deep in heavy infestations. Tunneling disrupts the contact between the plant roots and the soil. This interferes with water up-take causing the plants to die.

Grubs are capable of pruning the roots of plants, particularly when the grubs occur in high numbers. In pasture situations, grazing cattle easily pull the plants growing in the loosened soil out of the ground. Weeds quickly colonize the bare patches created where a plant dies or is pulled out. Birds, armadillos, and skunks dig grubs out of turf and pastures, often causing even greater damage in the process.

A large, dark-colored wasp, Scolia dubia, is often seen flying low over grassy areas infested with green June beetle grubs. The insect, sometimes called the blue winged wasp, attacks green June beetle grubs, and is, therefore, beneficial. This wasp is blue-black in color, slightly longer than an inch. The rear half of the abdomen is brown and fuzzy, with two large yellow spots. The female wasp goes down into the soil to find green June beetle grubs. When she finds one, she stings it, causing it to be paralyzed, then lays her eggs. The wasp larvae hatch and consume the green June beetle grub. In Alabama, wasp adults are most prevalent in August and September. Under some circumstances, this insect, and some microbial pathogens, will control a green June beetle infestation.

On turf, green June beetle control is site specific. In some cases, the grubs do such a good job of aerification that control is considered to be undesirable. This is especially true on rapidly growing, well-established bermudagrass that is not closely mowed. However, green June beetle mounds are usually not tolerated on highly visible areas such as highly maintained lawns or golf greens. Sod producers need to guard against this pest because the tunneling weakens the structural strength of the sod.

The following are steps for successful control on turf:

Reviewer(s): Will Hudson, Ph.D., Extension Entomologist, The University of Georgia.