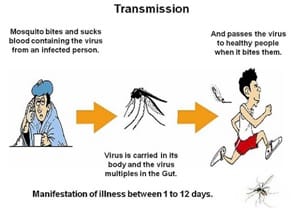 In 2001, the CDC and the Pan American Health Organization jointly released a document entitled Preparedness and Response for Chikungunya Virus Introduction in the Americas.  In late 2013, Chikungunya was found for the first time on islands in the Caribbean, where it has persisted and continued to spread.

Chikungunya fever is an emerging, mosquito-borne disease caused by the Chikungunya virus. It is transmitted predominantly by Aedes aegypti and Aedes albopictus, the same species involved in the transmission of dengue.  Chikungunya is an RNA virus that belongs to the Alphavirus genus in the family Togaviridae. The name chikungunya derives from a word in Makonde and roughly means “that which bends,” describing the stooped appearance of persons suffering with the characteristic painful arthralgia.

Epidemics of fever, rash, and arthritis resembling CHIK were reported as early as the 1770s. However, the virus was not isolated from human serum and mosquitoes until an epidemic in Tanzania in 1952−1953.  Subsequent outbreaks occurred in Africa and Asia, many of them affecting small or rural communities.

In Asia in the 1960s, CHIKV strains were isolated during large urban outbreaks in Bangkok, Thailand.  These large outbreaks also occurred in Calcutta and Vellore, India, during the 1960s and 1970s.  After the initial identification of CHIKV, sporadic outbreaks continued to occur, but little activity was reported after the mid-1980s.  In 2004, however, an outbreak originating on the coast of Kenya subsequently spread to Comoros, La Réunion, and several other Indian Ocean islands in the following two years.

From the spring of 2004 to the summer of 2006, an estimated 500,000 cases had occurred. Since 2004, Chikungunya virus had been causing large epidemics of chikungunya fever, with considerable morbidity and suffering. The epidemics had crossed international borders and seas, and the virus had been introduced into at least 19 countries by travelers returning from affected areas.  Because the virus had been introduced into geographic locations where the appropriate vectors are endemic, it was thought likely that the disease would establish itself in new areas of Europe and the Americas.

What about Georgia?  There certainly is a risk of introduction and spread; there is no immunity and appropriate vectors and hosts exist here.  McTighe and Vaidyanathan (2012. Vector-Borne and Zoonotic Diseases, Vol. 12:867-871) tested the vector competency of Virginia and Georgia strains of Ae albopictus for CHIK virus and determined that they were all highly competent vectors of this virus. In their conclusions these last authors stated, “Only early and specific detection of human cases coordinated with vector control can reduce the risk of local transmission of CHIKV in the US.” These symptoms appear on average 4 to 7 days (but can range from 1 to 12 days) after being bitten by an infected Aedes mosquito.  Infected individuals develop a high titer viremia and can infect mosquitoes during this time period.