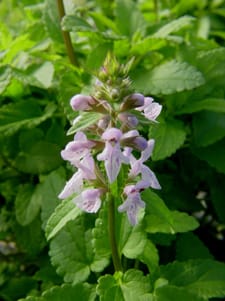 This weed is Florida betony. It is also called rattlesnake weed.

The publication Controlling Florida Betony in the Landscape gives cultural and chemical controls for this weed in lawns and landscape beds. The authors are Mark Czarnota, Ph.D., and Tim Murphy, Ph.D., Weed Control Specialists. Departments of Horticulture and Crop Science

Click here to see the publication for the following information:

Florida betony (Stachys floridana) (also called rattlesnake weed and hedge nettle) is a problem weed in both turfgrasses and ornamentals.

Florida betony is a “winter” perennial and, like most plants in the mint (Labiatae) family, has a square stem with opposite leaves. Flowers are usually pink and have the classic mint-like structure (Figure 1). Unlike its relatives, it has the unique characteristic of producing tubers that look like the rattles (buttons) of a rattlesnake, hence the name “rattlesnake weed” (Figure 2).

Click here to readthepublicationn Controlling Florida Betony in the Landscape