Got an event in your county you’d like to add? Let us know! 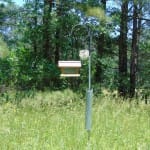 Habitat loss, competition from non-native house sparrows and starlings, and other pressures have led to a decline in Georgia’s population of Eastern Bluebirds.  The good news is that people who care enough to re-creat favorable conditions in their yards and parks can help turn this decline around!

Jim Bearden, Cobb County Master Gardener, established the Bluebird Trail at Green Meadows Preserve.  He will lead a walk on the 2.3 mile trail explaining the history of the trail’s establishment and purpose.   He will explain how the trail is maintained, how the nesting boxes are managed, and how the trail has contributed to the recovery of the Eastern Bluebird population in Cobb County.  The trail includes 25 nesting boxes and 10 feeding stations that Jim maintains with help from other citizen-scientists.  In the 2015 nesting season, 210 baby bluebirds fledged from the park’s nesting boxes.