Did you know that Japanese Beetles (Popillia japonica) feed on over 300 plant species?  Plants in the rose or cherry families seem to be a favorite targets.   The first one in my North Georgia garden appeared on June 1st.

In the past gardeners reached for an insecticide to handle the problem.  Sevin spray, Carbaryl (1-naphthyl N-methylcarbamate), was a popular choice.  However, Sevin is a broad spectrum insectide that kills other beneficial insects!  Sevin kills over 100 different insect species, including bees.

There is an easier way to handle a Japanese Beetle infestation.

To control the beetles simply pick them off of your plants and drop them in a jar of soapy water.  Be aware that they will fly away so act quickly.  So practice your technique of grabbing or forcefully knocking the insects into the jar.  They will drown quickly.

When I was younger my family planted a fruit orchard.  When the orchard was young one of my jobs was to pick off Japanese Beetles and deposit them into a jar of gasoline I carried around the orchard.  Wow, the gasoline was not needed.  Soapy water works just as well.

Worst case scenario, hang in there.  They won’t be around for long! 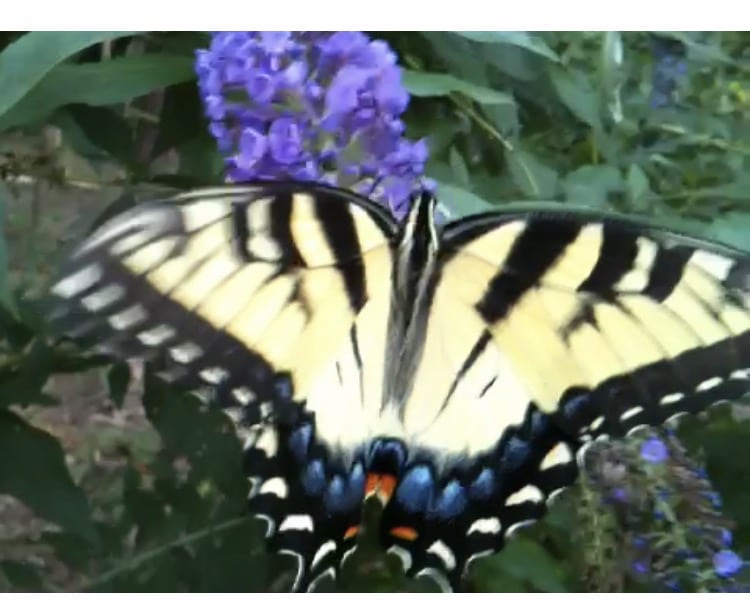 It is Pollinator Week 2017!  Since last year the rusty patched bumble bee has been put on the Endangered Species List and honey bee keepers in the United States reported hive losses of 33% over 2016-17.  How can the average Georgia gardener help our pollinators?  These steps are easy and will make a real difference to our pollinating insects:

University of Georgia entomologists collaborated with stakeholders across the state to develop Protecting Georgia’s Pollinators.  There is a role for every Georgia citizen whether you are a farmer, a landscaper, or a homeowner. 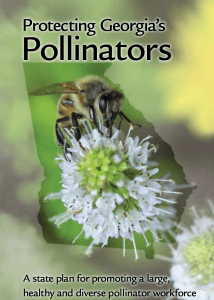 Adding flowering plants to your food garden attracts pollinators and as a bonus can also attract other beneficial insects.  To attract butterflies, adding plants that sustain the caterpillar stage of the butterfly is important.   The University of Georgia has done research on pollinator plants and has suggestions for plants that do well in our climate.

Plan for a Succession of Bloom

Strive to have plants flowering as much of the year as possible.  Even during the winter months if temperatures rise above 50 F, bumble bees and honey bees are flying and looking for nectar and pollen.

Adding pebbles or stones to your birdbath makes a wonderful water source for small insects with  delicate legs.  By cleaning the birdbath once a week you will avoid any mosquito problems.  If you don’t have a birdbath the drainage pans used to catch the water running out of potted plants can be used.

Wisely Use Any Pesticide

Examine your use of any pesticide.  Is the pesticide really necessary?  Your UGA Extension agent can assist you with any pest situation and guide you in deciding if a pesticide is the best answer.  Make sure you thoroughly read and follow any pesticide label.  The label is the law.

Have Your Garden Certified as a Georgia Pollinator Space

The Georgia Pollinator Spaces program is an initiative designed to recognize gardeners that consciously make an effort to improve pollinator health by creating pollinator habitat.   To get inspiration take a look at some of the gardens that are part of the program.

However you decide to celebrate Pollinator Week be sure to check our daily pollinator posts on the UGA Community and School Garden Facebook page.

You probably have seen them and not given them much notice, growing among  your blueberry fruits. They look like something just went wrong in fruit development.   These are mummy berries and they are actually part of a fungal pathogen, Monilinia vaccine-corymobosi.  This is a blueberry disease!

Mummy berries are caused by a pathogen

Over the season mummies fall off of the plant and oversummer and overwinter on the ground.  When conditions are just right in the spring, these bodies will germinate and can produce 650,000 disease-causing ascospores.  The ascospores can re-infect your plants creating a disease cycle.

Control is not difficult for hobby blueberry growers

This disease affects leaves and affects the fruits when the pathogen is spread to the flower bloom, by wind or by insects.  For commercial growers this can be a serious problem.  For the casual blueberry grower it is much easier.  Simply remove the mummies and throw them away.  Also, check the ground to remove those mummies that have fallen.

For those of you interested in pathology, Jade Florence has an excellent article, Mummy Berry, in The Plant Health Instructor.  If you are unsure if mummy berry is your problem, contact your local UGA Extension office for assistance.  If you don’t have blueberries in your community garden, they are a great addition and easy to plant.