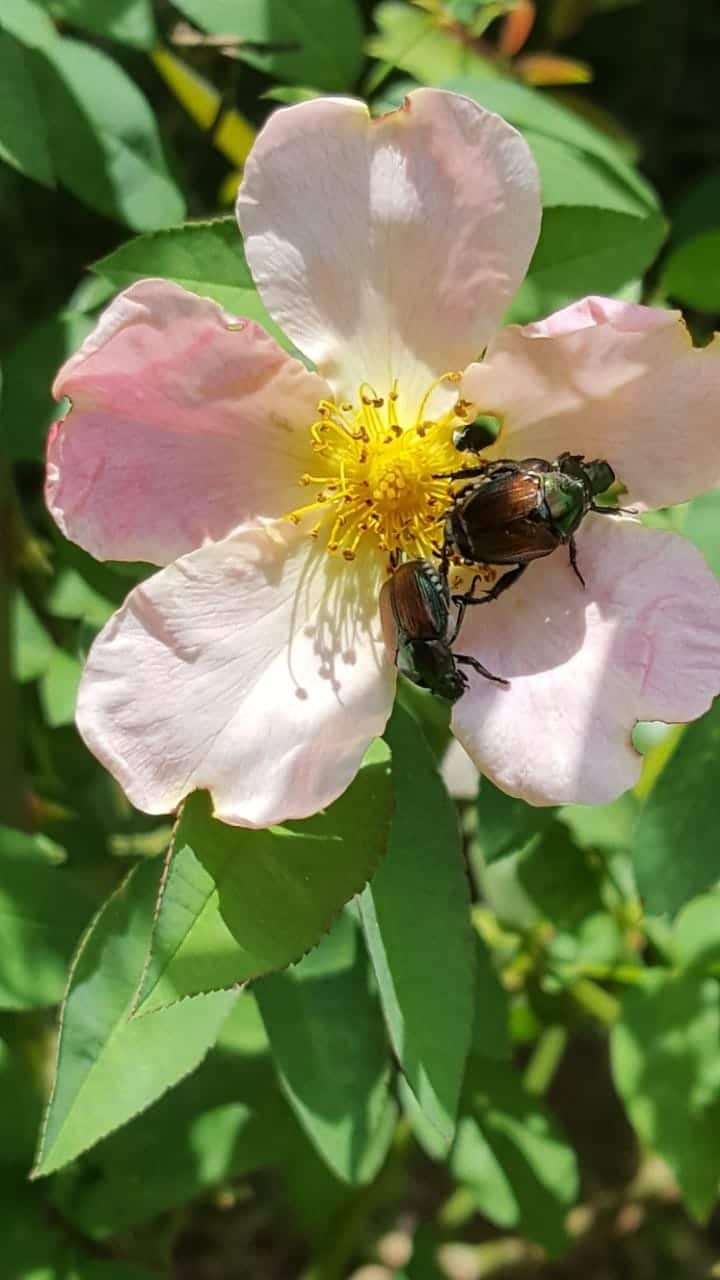 They are indeed back.  You have probably already seen Japanese Beetles (Popillia japonica) in your landscape.   They enjoy munching the leaves of roses, maple trees, cherry trees, peaches and grapes.  They actually are a pest to over 300 plant species.  A single beetle doesn’t do much damage.  Unfortunately once a beetle finds a food source other beetles soon follow.  It is the groups of beetles that do real damage.

Japanese beetles first arrived in the United States around 1917.  As with many non-native species, in their home country of Japan they are not a major problem.  This pest causes damage in the adult beetle stage as well as the larval stage.  The larvae, or grubs, live in the soil and can do damage to plant roots.

We often get questions from gardeners about these pests and thought it might be helpful to share them with you:

Do you need to worry about this pest?

The Japanese Beetle season lasts 4-6 weeks, so realize they won’t be around for very long.  They are not a major pest of vegetable gardens and generally eat the leave margins leaving a lacy-type leaf.  They sometimes also eat petals and can damage fruit.

Do the Beetle Traps Work?

Yes, the beetle traps do work by attracting beetles from all over your area and bringing them to your yard! The traps contain a pheromone, a sex attractant, that can attract beetles that may not have visited your garden on their own.

If you decide to use traps, do not put them in the middle of your garden as you would just be bringing in additional numbers of the pests.  Also, the traps will need to be emptied often.  The dead beetles give off an ammonia scent that will repel other beetles.

Wouldn’t it be nice if your neighbors put out traps to attract your beetles to their yards?

Is Their a Non-Chemical Control?

Most home or community gardeners can control Japanese Beetles by simply picking the insects off the plants and dropping them in a container of soapy water.   By regularly scouting for these insects and removing them, you will prevent any real damage.  This is a great job for kids.

What if I Decide I Need an Insecticide?

There are insecticides available to kill Japanese Beetles but realize that the chemicals don’t affect just those beetles but possibly beneficial insects as well.  Contact your local UGA Extension Agent for a specific chemical recommendation.  As with all pesticides you will want to follow the label directions to the letter.

It is National Pollinator Week 2016.  Events are going on all across the nation to draw attention to pollinators and pollinator health.  What are you doing to celebrate?

We have been excited to see all of the pollinator gardens across Georgia that are being created as part of the Pollinator Spaces Project.

In Rockdale County, ANR agent Steve Pettis led a group in creating the Rockdale Community and Garden, including a pollinator space.  This garden will be a great asset to the Rockdale community.

Heading Southwest from Rockdale, in Coweta County Brooks Elementary School planted their school pollinator garden in late April.  Principal Amy Harrison headed up a group that planned and organized for months before they installed their new space.  Coweta County ANR agent Stephanie Butcher helped the group get off to a great start.  We look forward to seeing more photos as the garden matures.

Traveling South from Coweta, the Riverquarium in Albany, Georgia, created a beautiful pollinator space.  Butterfly weed (Asclepius tuberosa), Meadow Blazingstar (Liatris ligulistylis), and Bergamot (Monarda fistulas) are just three examples of over twenty varieties of pollinator plants used in the creation of this garden.  This space will be a joy to Albany residents and visitors.  James Morgan, Doughtery County ANR agent, is an on-going resource for this group of gardeners.

Creating a pollinator space of your own aids in pollinator conservation, can increase food production, and brings joy as you watch the pollinators at work.  For resources on creating your own space and to be included in Georgia pollinator history visit the Pollinator Spaces Project webpage.  Your local UGA Cooperative Extension agent can also assist you in planning your garden. 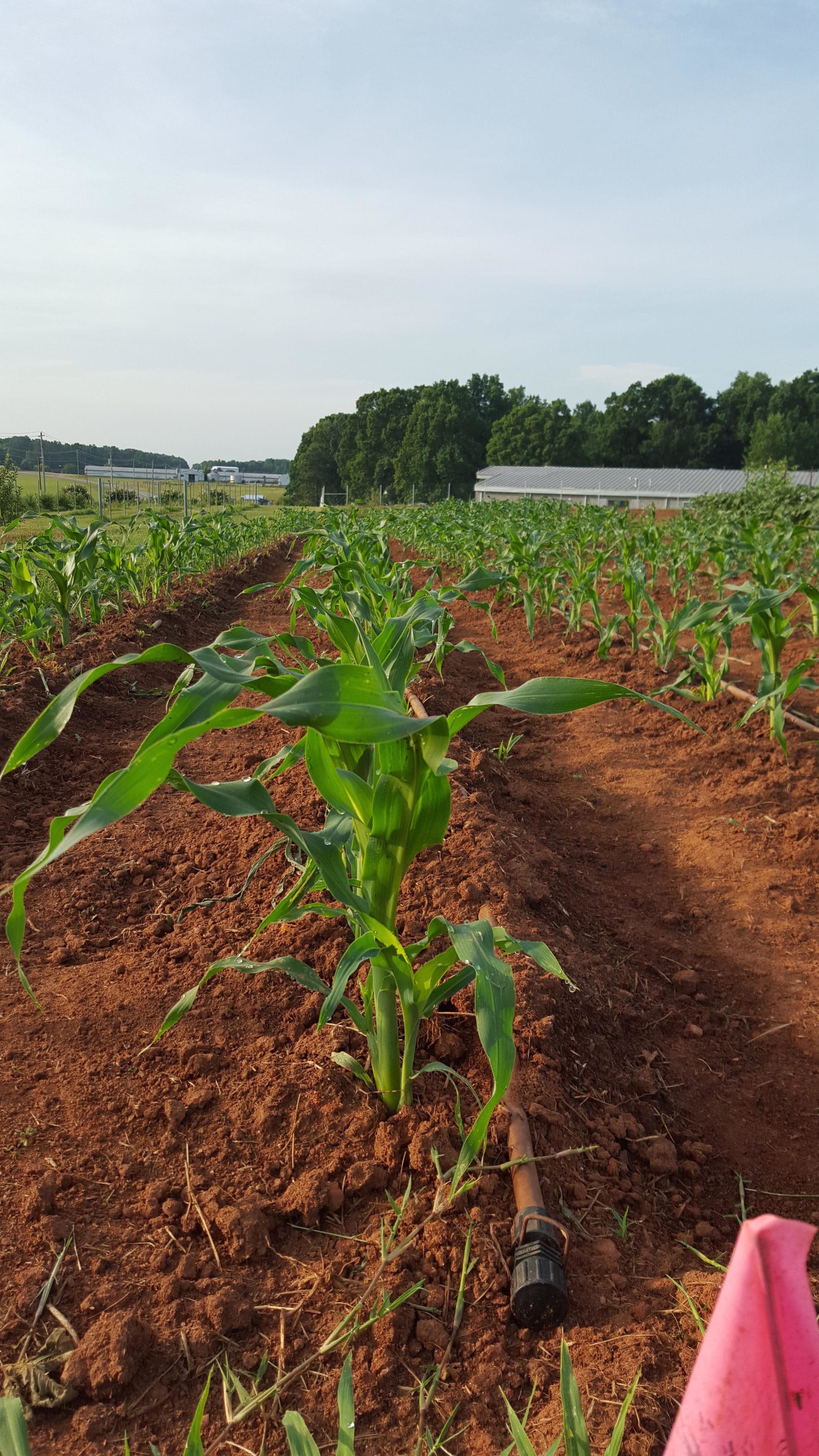 Fresh corn is one of the joys of summertime.  The serious corn connoisseur will have you boil the water first and then pick the ears to make sure corn flavor is at its peak. 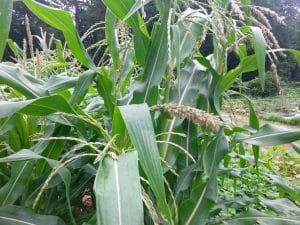 However, growing this crop can be controversial in the community garden.  Here is why:

You will not get much corn with a few stalks.  Corn is wind pollinated and each kernel of corn is formed from one grain of pollen.  It takes a large amount of pollen at just the right place on a corn plant to give you nice full ears of corn.  Larger stands will produce a higher quality crop than a smaller stand.

If you really want to have fresh corn of your own think, about planting corn in blocks and not rows.  This will increase pollination.  Also, as the corn tassels you could help pollination along by gently shaking the stalks.

Corn is Tall and Subject to Wind Damage

Corn is a tall, thin plant with a somewhat shallow root system.  That means any thunderstorm with a windy component could really damage your crop.   If you are a corn farmer with many acres of corn, wind from our afternoon thunderstorm might take out a few stalks at the perimeter of the corn stand.  If you are growing only 10 stalks, that damage could really affect your dinner plate.

Some community gardens like to stake each corn plant, like you would a pepper plant.  This adds extra support for those afternoon storms.

Corn Can Shade Out Other Crops

Corn is a tall crop and may shade out the rest of your plot or even your neighbor’s garden plot. There are shorter varieties which might be more appropriate for your garden but even shorter varieties like Golden Bantam or Sweetness Hybrid grow to 5 feet.  Growing Home Garden Sweet Corn has information on varieties recommended for Georgia.

Tom Thumb popcorn only grows 3-4 feet.  Popcorn is not quite the same, I know.

Think about asking for a plot on the perimeter of your community garden so shading won’t be a factor. Growing only corn for one season may improve your chances of a higher quality crop.

There are so many aspects to consider just to get fresh corn on your plate.   Who knew it could be so controversial? 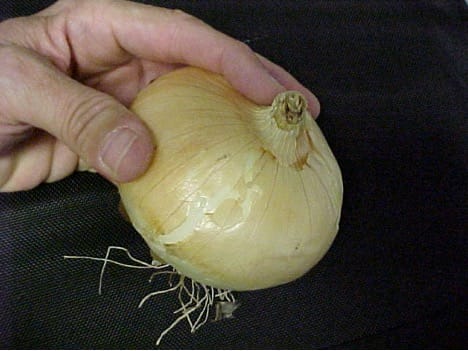 It is June, the official start of summer and a very busy time in the vegetable garden.  We have complied a list of chores to add to your list to keep your garden in peak condition.  According to UGA’s Vegetable Garden Calendar:

2.  Eat “high on the hog” this month and in July and preserve enough to last during the winter months ahead.
3.  For best results, harvest onions and Irish potatoes when two-thirds of the tops have died down. Store potatoes in a cool, dark place and onions in a dry, airy place.

4.  Clean off rows of early crops as soon as they are through bearing and use rows for replanting or keep them fallow for fall crops.
5.  Water as needed.
6.  Plant sweet potatoes and a second planting of Southern peas. 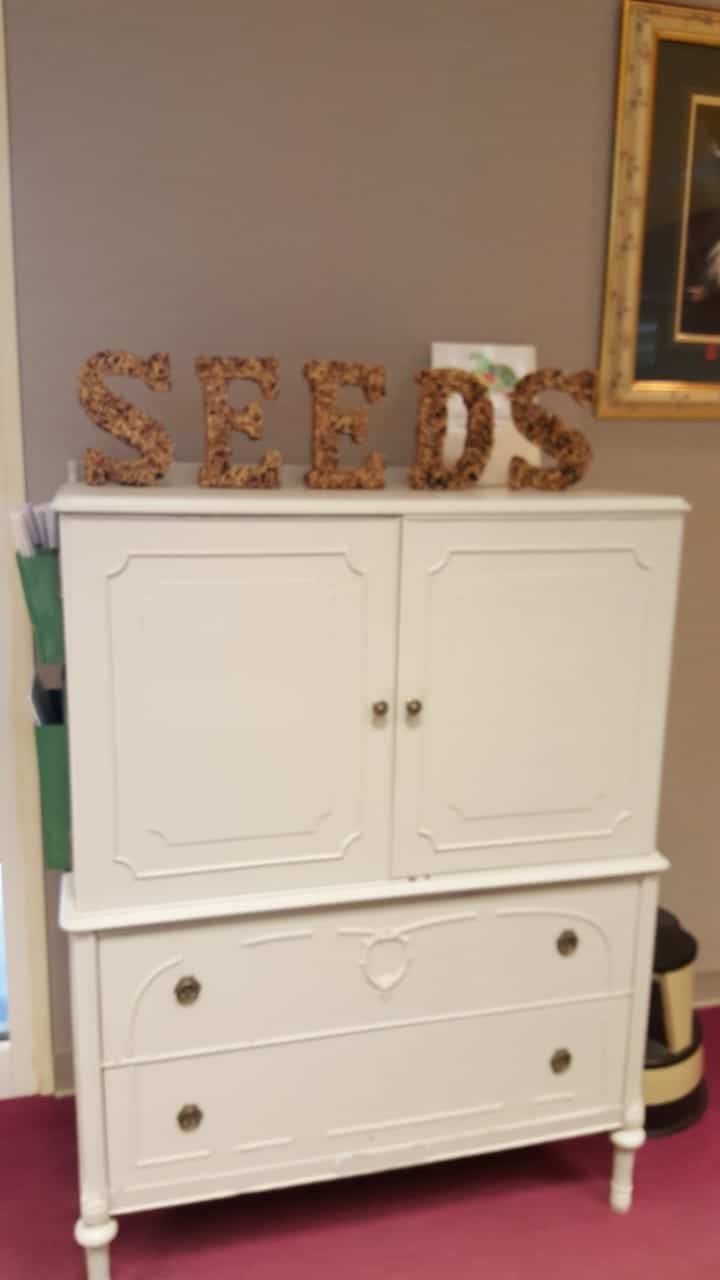 At Hickory Flat library in Cherokee County, Georgia they lend more than books.  They have a seed lending library!  Here is how it works:  Someone who is interested fills out a “Membership Form”.  They can then choose a package or two of seeds.  The selection is large.  These are seeds that Cherokee County Master Gardeners have harvested from their gardens and numerous community projects.  Seed companies have also donated seeds.  Instructions for planting and plant information is on each carefully prepared seed package.